We use cookies. By using this website you consent to their use.
OK
FAST DELIVERY
BUYER PROTECTION
PRIVACY
Order status
‹ Return to search results │ Home  >  Summer tyres  >  215 / 65 16  >  ...  >  Continental VancoEco 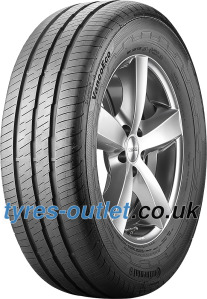 We only supply the tyre. If there is a rim shown in the picture, it is for display purposes only.

72dB
DEX:
For questions or concerns please contact us at reifen-outlet​@delti.com

Easier on the gas

For transporters and vans.

Economy and safety for day-to-day use: The new VancoEco™ for light commercial vehicles and vans.

Continental has added a new tire with savings potential to its range that has been specially developed for vans like the Mercedes Sprinter, Ford Transit and Volkswagen T5. The new VancoEco has around 30 percent less rolling resistance, which can save a calculated four percent in fuel and emissions. At the same time, the engineers have managed to keep the braking distance on dry and wet roads short and to make the tire perform like a car tire.

The great savings potential has been made possible by two design measures that together help reduce rolling resistance considerably. The new transporter tire has been given a silica tread compound like the ones already used for car tires. In addition, the tread design for the transporter tire has been changed so that deformation, which all tires are subjected to when the tread elements run into the ground contact area, could be reduced considerably. The two measures combined with a very shallow tire contour allow up to 30 percent less rolling resistance.

Cost-effective due to optimised rolling resistance. With its new silica tread compound, developed to reduce rolling resistance, and particularly firm tread, the Vanco™ Eco is an impressive performer. Its flat contour and reduced tread depth ensure less deformation of the tyre during rotation even under a heavy payload. The result: lower fuel consumption due to reduced rolling resistance.

Short braking distances, even on wet surfaces. Due to the increased loading capabilities of light commercial vehicles, high demands are placed on the braking performance of van tyres, especially in wet conditions. The gripping edges of the pattern blocks create a windscreen wiper effect and ensure an optimal interlocking with the road surface for short braking distances.

The European Union, under CE 1222/2009, has mandated that all tyres manufactured after the date of July 1 2012 for cars and commercial vehicles include standard EU Tyre Labels classifying them by three performance characteristics:fuel efficiency classified from A to G,wet grip classified from A to G, and noise emission in decibels.

Categories of tyres unaffected by this regulation include: retreaded tyres, professional off-road tyres, racing/sports car tyres, as well as certain types of tyres designed to improve traction such as studded tyres, T-type temporary spare tyres, tyres for cars built before 1990, tyres with a maximum allowed speed of 80km/h, tyres for rims with a diameter less or equal to 254 mm or greater or equal to 635 mm.
This label is intended on one hand to promote economic and ecological efficiency in traffic, as well as increase road safety, and on the other hand to help consumers select appropriate tyres by ensuring a certain degree of product transparency.

Nevertheless, the label has been criticized for only showing a very limited number of characteristics. Professionals argue that tyres have many more features that are important and relevant to road safety, including but not limited to aquaplaning properties, driving stability, service life, product properties on wet and dry roads other than wet grip, properties on snow.
Tyre manufacturers suggest that the test results from various institutions and industry magazines should remain a very important source of information for the end consumer, because they focus on and rate a wide variety of tyre properties and features.

*Prices include VAT and delivery within mainland UK (excl. Scottish Highlands).
**More than 90% of our orders reach the customer in the specified delivery time.
Return to search results
Super Easy Ordering